I am PSTC - Doc Eddy

Doc Eddy, the new collision center manager at Birmingham Freightliner & Western Star, was destined to be in the truck business. 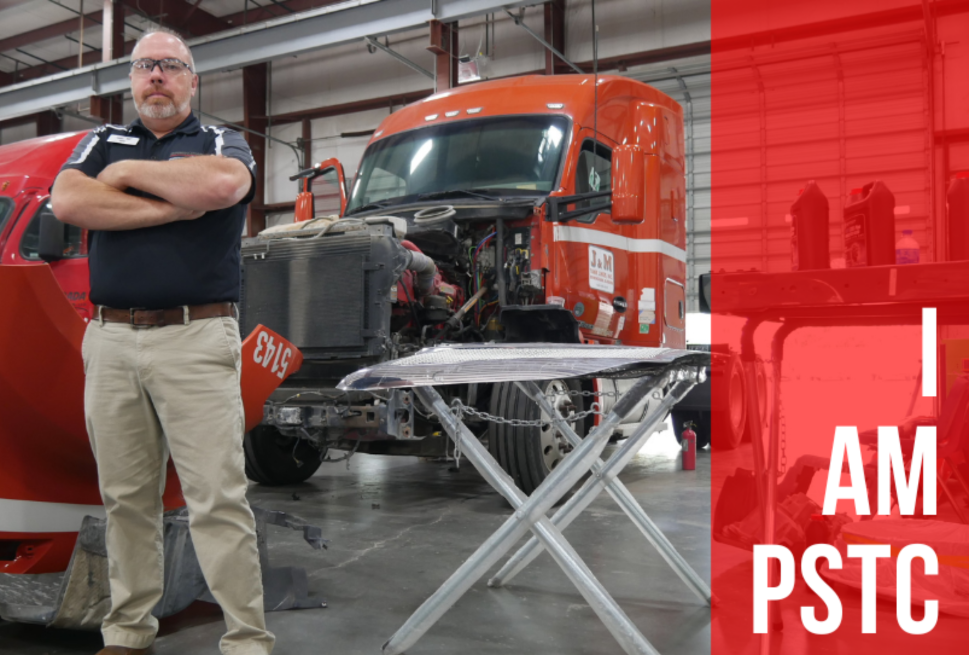 I am PSTC - Doc Eddy

Doc Eddy, the new collision center manager at Birmingham Freightliner & Western Star, was destined to be in the truck business. He followed in his father’s footsteps and never looked back. In his career he’s learned the importance of hard work, continuous improvement, and, most of all, family.

“Dad was a mechanic—that’s how I got into it,” said Doc, who started in March of 2022. “He was a shop manager with Ryder leasing. Because of him I wanted to be around anything mechanical. I had an interest real early in life. We did hot rods and worked on those together.”

By 19, Doc had already put in some years at truck leasing companies like Ryder and Rollins. He washed trucks and worked the fuel island in the summer months between school semesters until he worked his way up to being in the shop. At 25, he got a job as a mechanic with Ryder, and in 60 days he was promoted to shop foreman. “I hustled, and they saw that,” Doc explained simply.

Doc moved around, working in shops as foreman for over a decade before switching it up and working at a trucking company. For him the focus was different, “At leasing companies the priority is the customer, but at trucking companies, it’s the driver.” But moving over to the truck dealership side was the biggest change of all. Doc is friends with Birmingham Freightliner & Western Star’s former collision center manager David Gurley, and David tipped him off that he might be the perfect fit when the position was open again.

“This is different than everything I’ve done before,” Doc said. “It’s whole lot of transition for me. With trucking and leasing, the goal is to get the job done quick. At the collision center things aren’t quick, they take time, which is unique. Here at Birmingham Freightliner & Western Star there’s a good atmosphere. We know what we’ve got to do every day when we walk through the door. I just got to steer the ship.”

Doc is proud of the team that he works with, which feels like a family and includes younger technicians that are willing to learn and “get after it.” He utilizes the shop’s mentor program that places new hires with more experienced technicians who show them the ropes. With a good team already in place, Doc plans to grow the Birmingham collision center business by demonstrating that they offer the best quality service. He reaches out often to Danny Prather, collision center manager at Peach State Truck Centers Jefferson, to get advice and plans to go to that facility to learn from their setup.

“Our goal is to be the best,” said Doc. “If we do our part, the customers will come if we’re doing it right. We can’t get complacent, and we can never be satisfied. We always got to look at a better way to do something. Even experienced techs can always learn something new. I’m very thankful to Peach State, who gives great benefits and pay and supplies everything that we need to get the job done.”

Doc thinks about the collision center even when he’s not there, but he also knows how to clear his mind. He cherishes his time with his grandkids which are a major focus in his life. Doc proudly shows off pictures of the youngsters to anyone he meets with in his office. He also has a Harley-Davidson motorcycle that he rides whenever he gets the chance. For someone who’s always thinking about how he can make himself and his business better, Doc understands the importance of slowing down and being patient, too. Just like repairing a beat-up tractor trailer, good things take time.

Our goal is to be the best. If we do our part, the customers will come if we’re doing it right. We can’t get complacent, and we can never be satisfied. We always got to look at a better way to do something.

I am PSTC - Gary Conleay