I am PSTC - Kenneth Williams

Kenneth Williams, who handles bus sales in the southwest territory of the state, worked for a Georgia school system for over a decade. 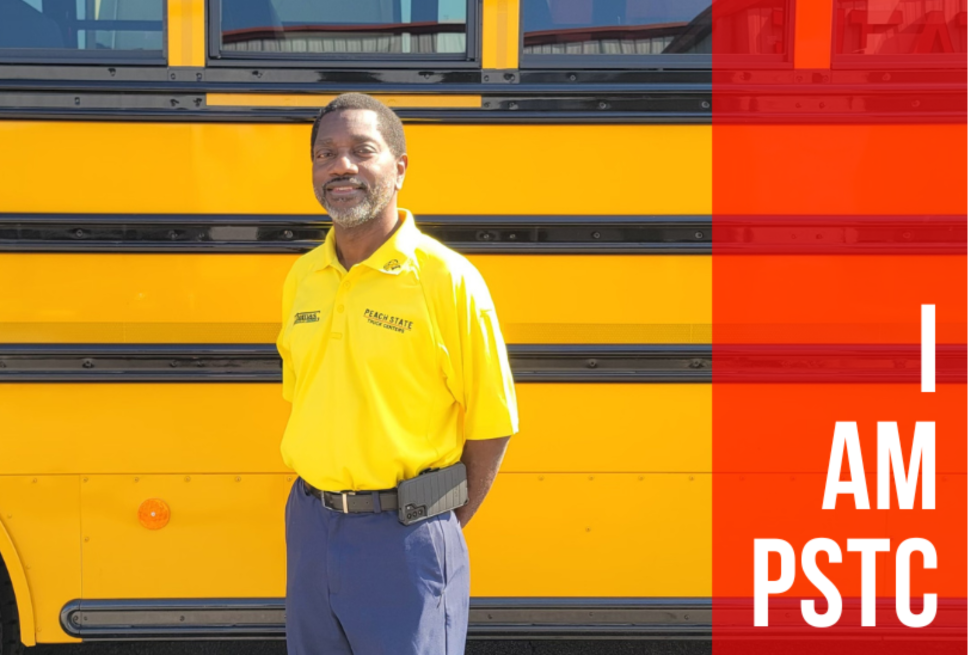 I am PSTC: Kenneth Williams

Peach State Truck Centers is proud to work with school systems in the state of Georgia to offer the safest and most technologically advanced school buses on the market, Thomas Built Buses. The Thomas Bus of Georgia team at Peach State is special because it’s made up of individuals who are not only highly knowledgeable of their product line, but who understand the products’ purpose. Kenneth Williams, who handles bus sales in the southwest territory of the state, worked for a Georgia school system for over a decade so he knows how important it is to have safe, reliable buses for the students that ride in them.

Kenneth started his career in the U.S. Air Force where he worked as an aircraft scheduler for 24 years. One of his favorite parts of being in the military was being stationed in many different places throughout the world like Florida, Germany, Japan, and Arizona. Seeing different places and meeting different kinds of people, along with experiencing the different cultures when he was off duty were very meaningful for Kenneth. On the job, he was charged with managing a team of 28 schedulers who maintained a fleet on 118 aircraft. They kept these aircraft scheduled for regular maintenance, which was incredibly valuable to the pilots who would fly the planes, especially in combat.

When he retired from the Air Force and acquired a bachelor’s degree in information technology, Kenneth saw himself working an IT job somewhere. But he was living out in Arizona when his father sent him a job posting for transportation director closer to home in Albany, Georgia. The job, which required maintaining a fleet of school buses, was a perfect fit.

“To become a transportation director, it was a smooth transition for me,” said Kenneth, who started in the position in Dougherty County, Georgia in 2008. “I was maintaining buses and managing supporting staff, like what I was doing in the Air Force. Because of my IT degree I was also able to bring the department up to current technology standards. At the time there weren’t any computers or technology, like routing systems. They were significantly behind, so it was important to get them to a place so that we could function efficiently.”

Kenneth’s biggest accomplishment during his time with Dougherty County was updating personnel and their fleet of buses. Kenneth established a highly reliable fleet which was done by buying the school system’s first Thomas Built Buses. And since then, they have only purchased Thomas buses, which helped them see a major reduction in vehicle maintenance and pupil safety. These buses were purchased with the help of salesperson Ray Durden at Thomas Bus of Georgia.

“I have a relationship with many school systems in that area because of my transportation director days,” said Kenneth. “I know the area, which means I can create more opportunities for business and relay the benefits of purchasing Thomas buses because I know firsthand. I go out and visit customers as often as possible, meet them once every six weeks calling on them.”

Recently, Kenneth has been demoing the new all-electric Thomas Built Buses C2 Jouley. The Jouley was driven around southwest Georgia to four different counties to give tours of the vehicle that could very well be the future of school buses. The C2 Jouley is emissions-free, noise pollution-free and fossil fuel-free, which can lead to a major reduction in operating costs for schools. Additionally, Kenneth educates potential customers about the federal grant money that’s available to schools that make the switch to electric.

“It’s exciting that I’ll be a part of the transition from one platform to another. It’s great that the school systems could get away from fossil fuels and budgetary costs due to fuel costs. This is important for the children, because they’ll be riding in a school bus that won’t expose them to all the harmful emissions from a gas or diesel.”

So far in Georgia since federal money has been released, there’s been a lot of interest in the Jouley bus. Kenneth and the Thomas Bus of Georgia team’s goal is to help educate Georgia schools systems and to provide support for the electric platform. There is a lot of interest so far and they’re expecting to sell quite a few.

“Working with the Thomas Bus of Georgia team, we all work together to deliver the best product to our customers,” finished Kenneth. “And we’re lucky that Peach State provides the business that we operate under, giving us the tools and the expertise to help our customers. Peach State is a great organization to work for and look forward to being on the team for many years to come.”

Working with the Thomas Bus of Georgia team, we all work together to deliver the best product to our customers

The Basics of Semi-Truck Maintenance