I am PSTC - James Tucker

James Tucker—service manager at Peach State Truck Centers Austell—is a manager that likes to get down in the trenches with his team. 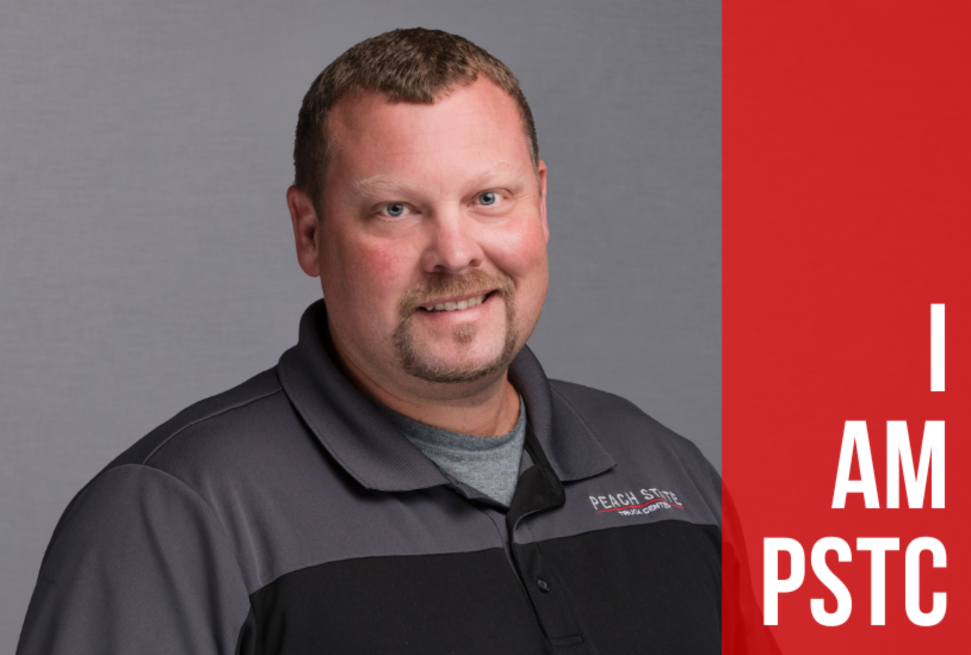 I am PSTC - James Tucker

James Tucker—service manager at Peach State Truck Centers Austell—is a manager that likes to get down in the trenches with his team. Tucker—as most people call him—can do this because he knows what it’s like to do his teammates’ jobs. Since joining the Peach State family in 2014, he’s moved around to different locations and taken every opportunity he’s been given to learn new roles and take on new challenges. Tucker knows just about everything that goes on at a commercial vehicle dealership, and when he doesn’t, he’s willing to learn.

Tucker was a tinkerer growing up, working on cars with his uncle who raced at local dirt tracks. In high school, he went a slightly different path and took shop classes and carpentry, eventually building and delivering his own furniture as a business. When an opportunity for more money arose in 2000, Tucker joined Watkins Motors as a trailer technician. A little while later he moved to US Xpress where he worked his way up to shop foreman. After some years in the workforce, Tucker knew he liked working for a family-owned business, and he knew he was ready to settle down with company for the long term.

“When I was looking for a change in my career, I reached out to my friend Mark Maddox [Peach State trainer] and asked him about Peach State,” said Tucker. “He told me that the company was growing, so I applied. When I interviewed, I told them I wanted to find a place where I could stay steady and grow. At this point I’ve had many positions and been at many [Peach State] locations. There’s always been an opportunity to change things, and my ultimate goal when I started was to become a service manager.”

Tucker started out as a technician at the Austell location. After two years he moved to service adviser where he learned that he loved—and excelled at—working with customers. Tucker describes himself as a people person, so getting to know people and forming relationships at the service adviser role was a revelation. The importance of people skills and building relationships was a major lesson from one of Tucker’s mentors, Peach State’s former director of service Bryan Leskosky.

The next major move for Tucker was in the world of Elite Support and continuous improvement. The Daimler service initiative allowed him to receive training in structured problem solving. Tucker learned how to identify a problem and build a plan to strategically eliminate it. He used this skill as the CIC (continuous improvement coordinator) for Austell, then as a regional CIC working at several locations to guide them in maintaining Elite Support certification.

Tucker’s first opportunity as service manager came in 2019, when he took on the role at the Specialty Vehicles location, dealing mostly with medium-duty vehicles and the Thomas Built Buses school bus brand. This was new territory for him, but he took on the challenge and was able to beef up the shop’s numbers and establish a hard-working, unified team. One of the major keys to Tucker’s success at SV was another strong mentor for him, Forest Park’s service manager Steve Plant. After two years the service manager position in Austell opened up, and it was time for Tucker to come back home.

“It was nostalgic walking through the doors of Austell for the first time as service manager after years away at other locations,” said Tucker. “I let the team know early on that I wasn’t going to be in the back barking orders, but I was going to be right there with them solving problems and getting our customers what they need. Because of that I can say that morale here is very good.”

As a manager, Tucker’s motto is train, coach…train, coach. This allows his team to grow and learn just like he’s been able to during his time with Peach State. Outside of work, Tucker has spent time helping others reach their potential, too—mostly young people working to achieve Eagle Scout. Completing an Eagle Scout project requires business skills, problem solving abilities and a solid budget—areas where most youngsters struggle but Tucker has great experience. Now that his son has graduated, Tucker has hung up his scout badges for good and he looks to the future.

“There’s a big difference working for a family-owned business that puts people and morals over profits,” finished Tucker. “Because of the chance I was give to grow and learn, I have loyalty to Peach State and I want to be here for a long time.”

“There’s a big difference working for a family-owned business that puts people and morals over profits. Because of the chance I was give to grow and learn, I have loyalty to Peach State and I want to be here for a long time.”

The Basics of Semi-Truck Maintenance